Madonna. Released her first single “Everybody” in 1982. It became a dancefloor hit in the underground clubs of the USA and, soon after, the world but it wasn’t until “Burning Up” was released that we in the Australian club scene heard of her. I remember seeing the video of Madonna writhing around on street asphalt looking like Marilyn Monroe and wearing loads of plastic bracelets. We instantly, guys and girls, adopted this look and a million shades of it and took our 15 year old selves out to the streets and clubs of Oxford St in Sydney. It was the era of acid trips, no doze and spumanti, disco was dying and Madonna seemed to step up to the mark and take its place effortlessly. After the sexy slow groove of the 70’s we wanted faster, more confrontational, heart racing music formulas and video hits. Here it was; and with her wicked, so slutty, don’t give a toss, finger up at the establishment, messed about attitude we were hooked. 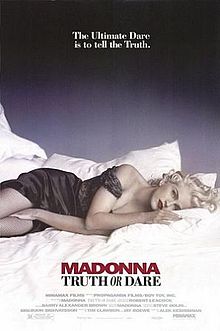 We were her slaves, even personally being part of 2 Madonna tribute shows. The peak of my Madonna madness came while she was doing the Girly Tour. It was her brother Christopher’s birthday and a group of us were asked to perform at the party. It is surreal standing next to your idol and singing Happy Birthday with her, to her brother on a stairwell overlooking a room full of Sydney’s most beautiful movers and shakers. Christopher and I picked the chocolate dipped strawberries off the cake and threw then to the heaving throng. I was extremely let down by Madonna at that party, she was tired and clearly just wanted to get the hell away from the madness but stayed, maybe for Christopher, and looked bored out of her brain. This was after a MONSTER world tour so she had earned tired.

Madonna has been not stop in your face to the point where I can’t remember a time without her musically. Having also been there for every movie, yes even the ones we fans would prefer to forget about, we were thrilled when she nailed Evita so well. Trailing along in the wake of her oft times disastrous personal life through the lenses of the paparazzi Madonna has become so entrenched in our psyches that it’s often like we know her better than we know the people in our street, making it easy and painless to gossip about her, which brings her more into our world. Everybody has a Madonna moment to share, be it a disastrous date movie, early bedroom hairbrush singing, rollerblade track, wedding waltz or a zillion others, just bring her name up at a dinner party, everybody has a story.

Now I’m the first to admit that lately there has been a whiff of desperation about our Madge; the need to stay current, creative and controversial starts to look like a hard slog when you’ve been doing it for over 30 years. Every time she has brought out a new album in the last few years I have felt a little more embarrassed for her. Staying young forever is clearly thinning her out, in all ways.

So, about 20 years after I would have expected it, Madonna has finally made her first foray into the world of fragrance. She has chosen the house of Coty as her scent mother, which strikes me as both extremely clever; for their enormous marketing and distribution powers, their long running work with many big celebrities; Gwen Stefani, Jennifer Lopez, Beyonce, Celine Dion, and our very own Kylie Minogue are just some of the Coty celebs, but also in all honesty on the flip side I would have hoped Madonna might have gone and found a more niche brand perfumer and really rocked our socks off. I suppose the lure of making big profits ran roughshod over the siren call of making the best. As yet Madonna’s fragrance Truth or Dare has not made it to our shores but by a lovely stroke of luck my friend Jay was over visiting in the USA teaching shoe design and cobblery last week and he just happened to drop by Macy’s, where there just happened to be a friendly sales assistant who just happened to let him have the free gift with purchase tote AND clutch, as long as he bought the BIG bottle. So Jay dutifully bought me 75mls of Truth or Dare and I am so grateful.

Design wise I love the gold and white box with its embossing. It looks cool and, for want of a better word, classy. As a side note an Australian artist RJ Williams (his work has hung in the Art Gallery of NSW and Museum of Contemporary Art) is currently suing Madonna for her use of his copyrighted symbol. Upon opening the first thing you notice about the bottle is its unusual hexagonal shape with the look of beading around the perimeter. It is stark and neat, comfortable in your hand, the little gold tone crown on top like the head of a scepter or a scaled back Westwood-esque world. The whole bottle has heft and could even be a nod to Deco. I really like it, while being a much calmer piece that I ever would have expected Madonna to put her name to it does fit. 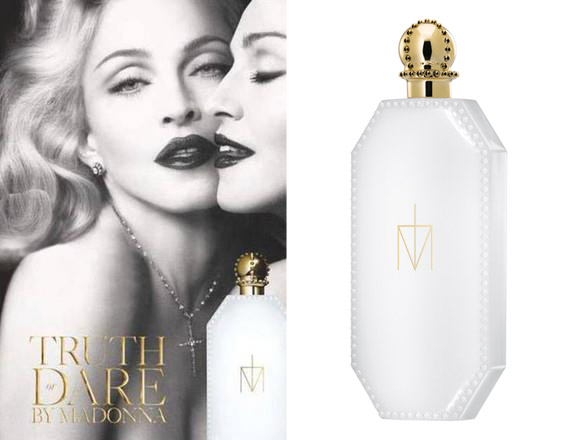 So history and design aside, the most important thing in a perfume, in my eyes anyway, is the juice. Madonna asked perfumer Stephen Nilsen who is the nose behind Vera Wang’s 2011 Lovestruck, SJP’s 2009 Dawn, and Bond No 9’s 2008 Andy Warhol Union Square for a white floral tuberose fragrance reminiscent of Robert Piguet’s 1948 Fracas that her mother wore. Having lost her mother while she was very young Madonna wanted to bring her memory back in olfactory terms while still giving her a massive update and facelift.

How does it smell? Buttery tuberose, creamy gardenia and neroli open in a big fat mouth watering HELOOOOO! I can hear my arteries clanging shut and wouldn’t be surprised if this fragrance could cause blood pressure problems it is so full of delicious fatty flavour. OMG! Madonna has blown my nostrils

As the initial blast calms down to a dull roar there is a peeking in of the lovely benzoin, which gives us a sweet and balsamic, slightly milky vanilla, and I love it when the Casablanca lily starts to hum in the background. I’m sure it’s there but I am not getting any jasmine in the heart, I’ll wait a while, maybe it’s a late starter. The tuberose, vanilla and gardenia pump gloriously through the heart of this perfume backed up by Casablanca, amber and, I think, musk with little softening of the after initial rush scent so far at 5 hours. I am thrilled that Madonna has done such a good job here. Sweet but not sickly, vanilla but not foodie, white flowers done with distinction.

Good for perfumistas, Madonna fans and the general public. A winner.

I hope you have enjoyed this lengthy look at Madonna’s Truth or Dare,

8 comments on “Madonna: Truth or Dare”