Launched all the way back in 1997 when I was a mere 22 years of age, I didn’t buy my first bottle of this until the early 2000’s when the local department stores interest in it started to wane and the cost came down. After you’ve read a few of my “reviews” you’ll see that there is a recurring theme here – I’m cheap and hate paying full price for fragrance, even if it means waiting for a few years til the novelty has worn off and others are onto the next hot thing. Billed as a woody aromatic for men, in my experience it doesn’t stray too far away from the familiarity of other Boss scents. They’ve carved out a deserved reputation for everyday fragrances for men over the years. Not overly adventurous in my experience but for men that aren’t as into this as we stink junkies are, they can safely rely on a Boss fragrance delivering what they need.

The first spritzes (again remember I am a super heavy spritzer) I find to be very pleasing, not overly tart or demanding, but you definitely get a strong tantalizing waft of a lovely fresh masculine scent. I’m usually applying this one as soon as I’ve dried off from the morning shower, and I love the crispness of those opening notes and the way it plays with my senses in those minutes as I get ready for my day ahead. Really peps me up!

There’s a lovely wash of the mint and just a hint of the pineapple that opens this up, and as it starts to settle down the lavender joins in keep things interesting. It’s nearly like a gently softly scented soap at this point but nowhere near as soapy sterile for my nose.

When the mid notes to start to warm it up ever so slightly, its still quite green, which I am learning is most likely the inclusion of freesia. After a good 30 minutes or so, it definitely begins to progress towards a spicier tone thanks to the tea and pepper, coriander and I can detect the beginnings of the base notes coming through. I’m a sucker for sandalwood based smells and actively go looking for them, and although this one tends to be a little light on the sandalwood, it is there and hangs in for the run which tends to fade around the 8 hour mark on my skin.

The real surprise for me in this set of ingredients is the patchouli, which no matter where I smell it always, ALWAYS, reminds me of opening Madonna’s Like A Prayer album all the way back in 1989. When the album was initially released, it was heavily perfumed with patchouli. I was working in a record store at the time and I found the heady smell intoxicating for those weeks when we held and sold an incredible amount of this album. (Does anyone else remember this? It was amazing!)

So I think you’ve got the idea that Elements Aqua has become a firm favourite of mine, I think I may have gone through at least 5 or 6 bottles so far. I usually have a 100ml and a 50ml on the go at once, the smaller one being my travel smell because it just works brilliantly no matter what I’m doing. I find it to be exceptionally wearable just about anywhere, anytime. 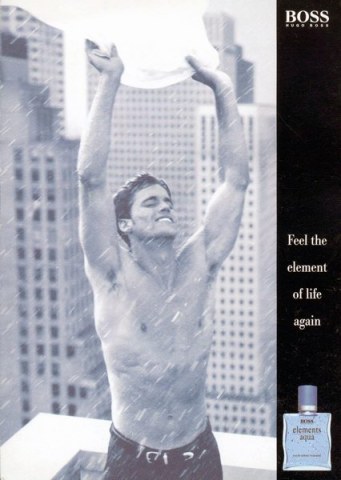 I also love that as its notoriety has waned, there are fewer guys that seem to be wearing it. If you are looking for a bargain scent that just about everyone will love, you could do worse than ignore this forgotten gem before it disappears forever.

See you next month,
Mx
.
.
A little present forv you Margeaux. Portia XX