When I was first married my in-laws told me I’d have a hard time cooking for my husband because he was so picky. I knew this but since I had persuaded him to try different foods while we were dating I knew I’d come up with a plan so I could cook what I wanted and not have him go hungry. I figured out that it was almost like cooking for a child (no offense, my love, if you’re reading this).

If he knew a dish had certain ingredients he wouldn’t try it. He was convinced he didn’t like certain things, even things I knew he’d eaten in the past and loved. The catch was that those times he hadn’t seen what was going into the pot. He came home and it was already prepared and waiting for him. I stopped telling him the ingredients or I told him what was in a dish after it was in his stomach. It worked, and cooking is much easier.

How does this relate to perfume? There are times when I think too much information is a bad thing. Sometimes I think knowing the notes before smelling can alter one’s opinion of it. If something smelled awful on me before or has a lot of notes I dislike I shouldn’t waste my time with it…or so I thought.

I asked for the Olympic Orchids Just Orchids sampler set for Christmas. I didn’t see many reviews and I didn’t really study the note lists prior to trying the perfumes.

When I tried Red Cattleyea it was juicy and tropical and a great counterpoint to the chill in the air at the time. Since it is named after a flower I was expecting it to be a floral, but there was more, something sweet yet wonderful…then it hit me. Fruit! Yes, the dreaded fruity floral. This was nothing like the mainstream fruity scents, this was a fruity floral with personality. My first impression was favorable so I just kept enjoying my perfume, sniffing happily at my wrist now and then.

When I looked at the notes I was horrified. This has multiple notes that usually turn ugly on me. Citrus, peach, and melon can make me run from the fragrance counter. Had I read the notes first I may have never sprayed but Ellen Covey worked some magic here.

Red Cattleyea opens sweet and fruity, more candied citrus than kitchen cleaner. Then there’s peach, on my skin peach usually smells like, well, let’s just say it’s not how I want to smell. But not this time. The peach is blended with apricot and it’s more jammy and sun warmed than fresh. Alongside this is a bouquet of gardenia and lilac. Hints of wood and vanilla keep peeking through and there’s an undercurrent of spice to my nose. As the fruit subsides the gardenia becomes fleshy and rich before fading. I don’t find the musk very strong, rather it holds everything together and gives the perfume warmth as well. On my extreme scent eating skin I could smell it easily for hours and ended up with the most wonderfully warm vanilla base. 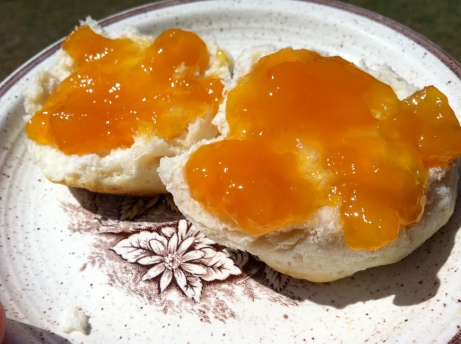 This isn’t a light skin scent, it’s got some kick to it, I’d say that if applied with a light touch it would be office friendly. I’ve worn Red Cattleyea to work and gotten compliments. If you work with fragrance-phobes, perhaps it might be a little too bold.

So Red Cattleyea’s fruity and sweet and peachy. On paper I shouldn’t like it yet I absolutely love wearing Red Cattleyea and there aren’t many fruity florals I can say that about.
Have you tried it?